Since my “it was the best of times, it was the worst of times” year in Afghanistan, I have become a healthy skeptic of official numbers and statistics.  Having said that, I understand that to understand the exact scope of problems confronting us,  statistics from credible sources help provide a measuring stick. In the world of illegal wildlife trafficking (IWT), where government, law enforcement and NGO’s have different agendas (although money is often a common denominator), finding ‘credible sources’, and particularly without ‘spin’, is not easy.

There is no question that in recent years the stock value in the illegal wildlife trade (IWT)  has risen significantly.  The prevailing literature has IWT at position number 4 in top criminal money makers, behind drugs, weapons and human trafficking.  Experts put the profit values somewhere between 7 billion and 23 billion dollars annually.  I am not quite sure what they base those numbers on.  Sixteen billion dollars seems to be quite a significant differential and it is not like transnational organized crime cartels are going to publish their IWT profit margins.

It is a daily habit of mine to scan the headlines for all stories IWT.  In my very unscientific survey relating to IWT arrests in Africa for the last few years, and discounting nationals in countries of origin,  I have come across 113 arrest files for Chinese nationals, 56 files for Vietnamese nationals and 55 files for Guinean nationals (there are essentially no African elephants in Guinea).  One arrest file, more often than not, involves a number of persons arrested.  These numbers are based on media reports so are definitely low.

In yet another of my unscientific data breakdowns relating to Kenyan arrests of foreign nationals,  and specific to ivory and rhino horn, there have been 50 Chinese nationals charged, followed by 7 Ugandans, 6 Vietnamese, 5 Tanzanians and a smattering of Ethiopians, Somali’s and Guineans (I am not including western tourists with bangles and such).   I am sure you get my point, the Chinese are in pole position by a long shot. 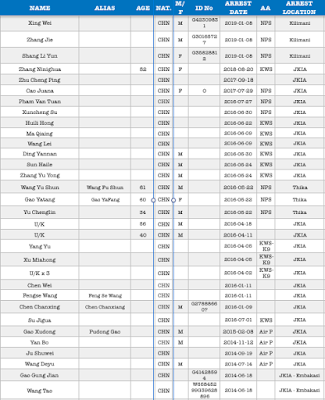 Why the Chinese interest in ivory?  It turns out that a species of elephant did exist in China going back to around 14th century B.C.  Also around the same time, is evidence of elaborate carvings made from elephant tusks.  Needless to say, that sub-species of Chinese elephant has not been around for a long time.

In Chinese culture,  the possession of ivory has come to symbolize power, strength, status and even seen to bring good luck.  Its value ranks third behind gold and jade.

So this is what we have to work with.  The population of China is estimated to be around 1.4 billion people (that is about 18% of the total world population) and that does not include all the ex-pat Chinese nationals living in foreign countries with the same cultural yearnings for elephant ivory.

At the end of 2015, I was learning/working on an informal basis with Kenyan NGO Wildlife Direct.  Dr. Paula Kahumbu was (and still is) the CEO at the time and had just returned from some type of IWT conference in Germany.  I will always remember her recounting a conversation she had at the conference with a Chinese diplomat who said essentially, “ivory trafficking is an African problem, not a Chinese problem.”

One year later, it would appear that China, who cares little of what the world thinks of its human rights policy, gave in to the continued public pillorying and world condemnation of its sanctioned ivory markets.  It essentially closed its domestic ivory market on December 31, 2017.

The conservation world was ecstatic with this news, overboard would be a better description, especially in light of the fact that Hong Kong (yes, it is in China), the acknowledged centre of the ivory market universe, was not going to close its legal market for at least another 3 years, maybe.

The impact for the Chinese market closure has been difficult to gauge.  There is no question that ivory prices have gone down, from approximately $2000 per kilo to maybe $700 retail.  The poaching/trafficking numbers are another story.  A number of early reports suggested that ivory seizure numbers had decreased radically.  The African Wildlife Foundation reported in early 2018 of an 80% seizure decrease.  The most recent published report from Wildlife Justice Commission (who are one of the few NGO’s who conduct in depth IWT investigations) indicated the opposite; that between January 2017 and July 2019, there had by weight, been a 124% increase in ivory seizures.

This may fall in line with a recent report of a World Wildlife Fund survey in China that found that while ivory consumption within China had dropped, more Chinese were purchasing ivory abroad (remember the Vietnamese arrest numbers?).  There have been indications, not surprisingly, of increased IWT sales on the the Chinese messaging platform “WeChat”, but these have not been substantiated.  “WeChat” is reported to have over 1 billion subscribers.

It was pretty evident that the bulk of elephant ivory was, and still is, ending up in China.  It may have taken a detour in transit at the port of Singapore or Bangkok or at a ivory shop in Laos or Vietnam but at the end of the day, its final destination is China.  Ivory is not only a powerful status symbol for the Chinese but it is, and perhaps more importantly, an investment.  Ivory is not going to lose its value, in fact, as the world elephant population continues to plummet, the price of ivory is going in the opposite direction.

Regretfully, elephants are not the only species facing crisis at the hands of Chinese consumers.  Rhinos, pangolins, bears, deer, sharks, vacquita porpoises, lions, tigers, monkeys, abalone and more recently even donkeys, are amongst a long list of animals utilized for the purposes of traditional Chinese medicine (TCM).  That is for another day.

The “Enterprise”, the Burundi stockpile, and other ivory behind the Extradition.

Why Wildlife Traffickers are Escaping Justice 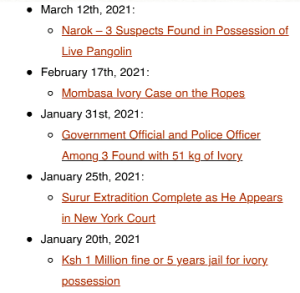 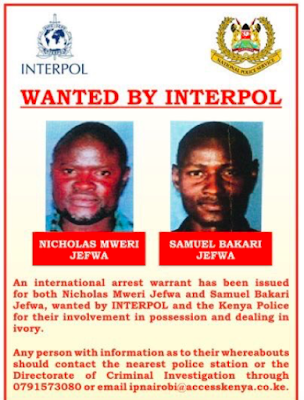 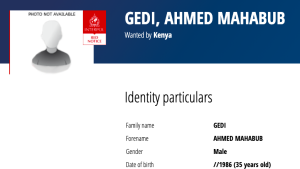